Comic contracts: A novel approach to contract clarity and accessibility

The content of this article was originally published on the Forbes website. The information and views set out in the article are those of the author(s) 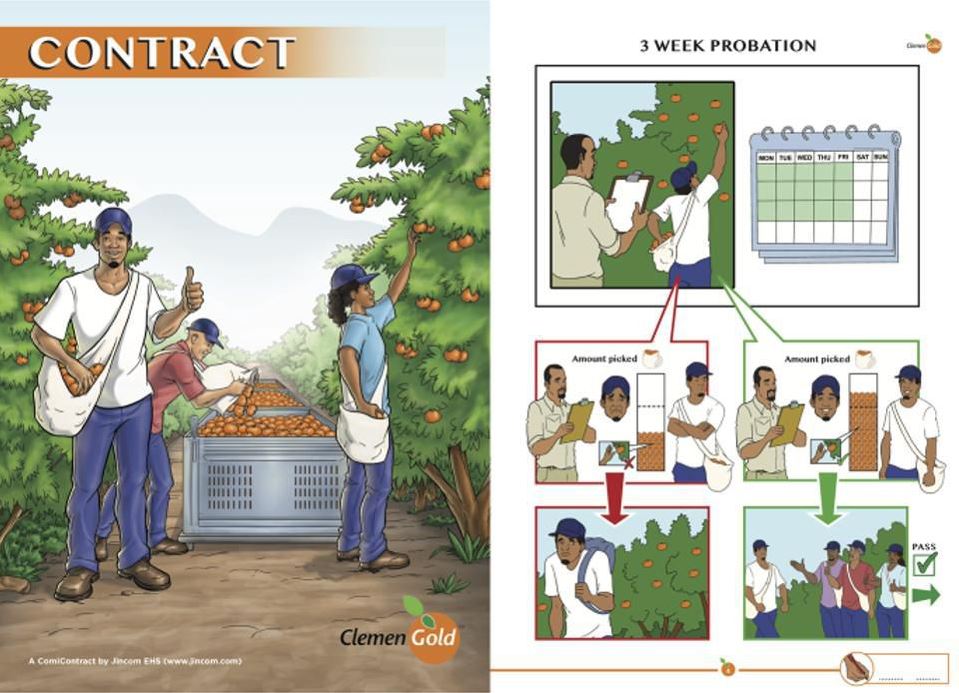 Beware the fine print is the oft-repeated expression heard in almost any deal or contract negotiation. It’s good advice that too often is ignored in daily life and job situations—especially among those segments of the population that may not have excellent English language skills, or for that matter, anyone without experience with the often-impenetrable legalese featured in contracts.

Almost by definition, the “fine print” can signal complexity, confusion and gobbledygook that even the smartest people might find difficult to wade through.

Robert de Rooy is an attorney based in South Africa and the founder of Comic Contracts – and this is no joke.

Comic Contracts are documents that are:

• Legally binding contracts in which parties are represented by characters

• The agreement is captured in pictures

“We produce illustrated contracts for people who are illiterate, people who are not literate in the language of the contract, employers with multi-cultural workplaces or companies that wish to transact with people who suffer from reading or intellectual disabilities. We want to enable people to be able to independently understand the contracts they are expected to sign.”

Those who are fans of contracts that have transparency, visibility, simplicity and clarity should take note.

De Rooy laid out the comic contract idea in a recent presentation at an International Association for Contract and Commercial Management (IACCM) Americas Conference. He says the comic contract was inspired by, and builds on, the work of preventative law and proactive contracting—a “movement in law that is being led by Professors Tom Barton (USA) and Helena Haapio (Finland), which promotes the use of visualization as a non-binding aid in understanding the text of an agreement, and thereby creates more ‘fit for purpose’ contracts designed for better relationships and better outcomes.”

Optimizing contract outcomes is the goal, no matter who the parties are, or their situation. Or, as de Rooy puts it: “We want contracts to be useful in aligning expectations and to signal healthy relationships towards successful outcomes. We don’t try to serve the interests of any party, we try to serve the relationships between them.”

Beyond Text-based Contracts: Examples Of Comic Contracts In Practice

Comic contracts step out of the “text”-based contract paradigm, de Rooy explains. Simply put, text on paper does not have to be the only way in which agreements can be reliably recorded.Pictures can are not only useful to aid understanding of the text in a contract, pictures can actually “be” the contract.

This takes contracting to a new and exciting level by making the contract document accessible to everyone. This offers a proactive and workable solution to the challenge faced by vulnerable or illiterate people when they are expected to sign, and be legally bound by, text agreements that they are not able to understand.

De Rooy explained the genesis of comic contract. He had been working on the idea for some years, and entered a description of the idea into a legal innovation competition in 2014, but it received no notice. A kind introduction by Kim Wright, an American lawyer and the American Bar Association’s Legal Rebel in 2009, to Professor Haapio, led to an invitation to present the idea at the Contract Simplification Conference in Switzerland in May 2016. “I could describe the idea, the theory of it and had some samples of illustrated clauses but I still did not have a complete field and signature ready agreement. This is where one of my practice’s clients stepped up to the plate. Indigo Fruit Farming gave me some budget to work with a Cape Town company called Jincom to produce a complete and professional quality Fruit-picker contract for their citrus farms.”

So, when he presented his idea, this time, he had something to show: “I did not have to try to describe the idea, the audience could see it, and they loved it. Moreover, I could tell them that this contract was actually going to be implemented.”

Initially, de Rooy was “worried that the workers would perceive the contract as patronizing, and the farm managers were concerned about doing things differently. So, it was agreed that their comic contract would first be presented to a group of workers they knew are unlikely to cause a problem if they did not like it for any reason. When this went well, it was then presented to a general group of new workers.”

After the contracts were signed, and the feedback came from the workers, “Indigo felt so proud that they wanted their consumer brand “Clemengold™” brand displayed on the contract.”

Robert has now partnered with Jincom to produce comic contracts for other companies who like this idea and want it for their people.

Apart from the Fruit-Picker agreement, other examples of comic contracts that have been or are being developed, include:

• Codes of Conduct for sport clubs in Australia

We Are Defined By Our Ability To Understand Contracts

De Rooy observes that the law uses “a blunt instrument called age, and assumes that when you reached the age of 18, you can read and understand contracts. If you sign an agreement after age 17, it’s not binding without your parent’s signature. But when you sign it after age 18, it’s binding. “When one is well-educated, that’s reasonable, but if you are vulnerable, illiterate or simply faced with a contract that is not in your native language, you are factually in the same position as a small child, except that the law offers you no protection.”

Tim Cummins, IACCM CEO, provides insight into the use of comic contracts. “Our long-held perspective is that today’s contract design and structure is frequently a source of risk. Contracts contain important information that the typical user finds hard to understand, a belief confirmed by recent IACCM research where 88% of business people said that ‘contracts are difficult or impossible to understand’.

“We have supported new thinking in contract design for several years, introducing a design award in 2012. Therefore, we were delighted to discover the exciting innovation by Robert – a remarkable example of social responsibility, inclusive thinking and effective risk management that has led to better economic results for both employer and workers. We continue to encourage new thinking and we are delighted by the steady recognition in major corporations that this is a path they should follow.”

Using comics as the contract might sound condescending, especially with respect to illiterate people. That is not the intent; it’s reality that illiterate people should sign contracts they understand. The purpose is to fill a serious need and a void in the ‘art’ of contracting.

Simply put, every picture tells a story. And when pictures express contracts, it provides clarity that can vastly improve the story of many people’s lives.

This article is a general information sheet and should not be used or relied upon as professional advice. No liability can be accepted for any errors or omissions nor for any loss or damage arising from reliance upon any information herein. Always contact your financial adviser for specific and detailed advice. Errors and omissions excepted (E&OE)